Years have passed since the return and judgment of the Celestials. However, only a handful of mortals remember the ordeal with the space gods. One man tries to reveal the truth but no one believes him. Meanwhile, the Eternals, immortal heroes of myth and legend, trying living amongst their mortal cousins and waiting for the return of the Celestials. However, the dark spawn known as the Deviants plot... Lire la suite 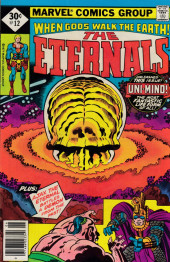