Life in Hell was the syndicated newspaper cartoon strip by Matt Groening which ran in the States during the 80s and early 90s. Asked to turn the characters into TV animation, Groening instead developed The Simpsons, retaining many of the characteristics of Binky, Bongo, Sheba, Jeff and Akbar in the series. In a world where The Simpsons and Futurama are as popular as ever, these hellish cartoons featuring... Lire la suite 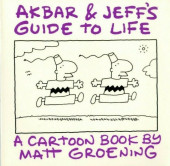