Debuting way back in 1944's Miss America magazine, Patsy Walker starred in a multitude of "soap opera" and "humor" titles through the late '60s, at which point Stan Lee brought her into the Marvel Universe with a cameo in Fantastic Four Annual 3. Since her first appearance, the energetic and upbeat character has been many things, teen idol, super hero, even satanic bride, but now she's back from the... Lire la suite 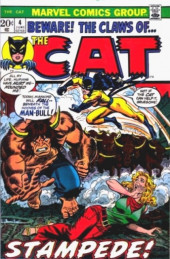