Once they were the teen heroes known as Darkhawk, Turbo, Ricochet, Green Goblin and Lightspeed. Now they're five young adults trying to stay out of spandex. But is walking away from the buzz of danger and intrigue easier said than done? And is a self-help group enough to keep these former crime-fighters out of action? 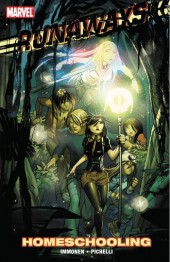