The first series is known for it's classic Jack Kirby art. The series lasted untill issue 9, but was revived some months later with issue 10 and a new creative team. After this series ended, Machine Man returned with a Machine Man mini-series in 1984 and returned with an ongoing series called X-51, starring the Machine Man. 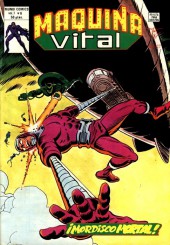