Cyberdata, an organization that intends to take over the world with the utilization of brainwashed beings with cybernetic implants, have sent some of their troops to apprehend a runaway named Velocity, who has the power of super-speed. Fortunately for Velocity, she is aided by Ripclaw of Cyberforce, a group of heroes who are opposed to Cyberdata's machinations and have a history with them. He is able... Lire la suite 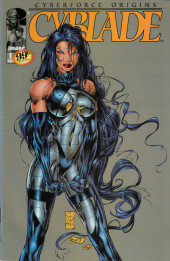